We’re near the end of week 3 for Writer In Motion and it’s been a crazy week. Lots of design work done, some code digging, and a back yard overrun by blackberry bushes that I’ve been slowly hacking away. So far I’ve uncovered 2 dead bushes, a lot of Oregon Ash saplings, and more tree spiders than I care to admit. Thankfully they’re all harmless and take care of the bugs, but boy have some gotten big.

This week has left me little time for much else, but this morning I’ve got my coffee and I’m ready to dive in. The Writer In Motion team gathered all the writers into two spreadsheets, read every story, and matched folks up based on their stories and writing styles, and I hear there was a white board and some zoom calls involved. Anyways, shout out to the amazing S. M. Roffey and S. Kaeth for pulling everyone together.

My two lovely critique partners for the week, Dan Koboldt and Jeffrey Ricker have tackled my story with a jackhammer and an axe, plus my longtime CP S. M. Roffey also took a bat and knocked a few things around.

One of the things about feedback from multiple people is everyone sees the story differently. We call it subjectivity in the industry, but as the author this can really cast a lens of clarity. Or in my case, have dividing opinions. 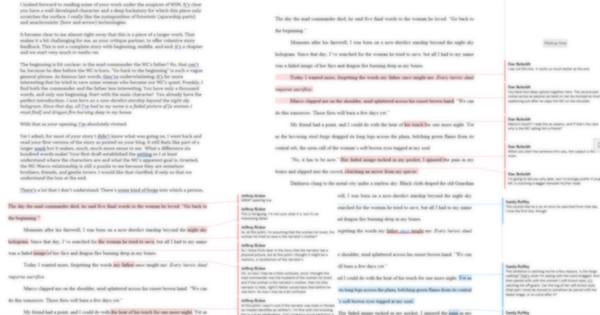 I’ve blurred this image out a little to protect the innocent, but as you can see I have an edit letter (this was fantastic!) and three very strong sets of notes. Because Writer In Motion is all about transparency of process, here’s how I’m gonna roll.

The revision will be up sometime tomorrow, then the story will be shipped off to my next round of CPs, and of course a certain editor I love to play traitor with demanded (yes, demanded) I send it to her too. Carly’s been gutting the novel where Braygen appears as a secondary character and quickly shoulders his way into the spotlight, so I can’t wait for her to finally get a peek inside his head. And probably make me rewrite the book again… kidding.